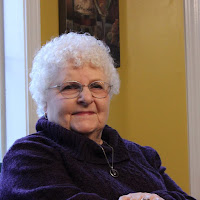 Arline Chandler passed from this earth on the morning of January 12, 2016, at her home in Heber Springs, Arkansas.  Arline had been diagnosed with late-stage ovarian cancer near the end of September 2015.  She died surrounded by people who loved her dearly...as you no doubt did, if you are reading this post.

Arline Ramsey Chandler Smith was born April 19, 1939, in Searcy, Arkansas, to the late Homer Arlie and Sallie Loree Hassell Ramsey.  Arline was reared in Heber Springs, where she excelled in all things, especially music – particularly voice and piano. Arline liked to tell that she was on the “Cradle Roll Call” at First Baptist Church, where she has been a faithful member since her infancy. If Arline wasn’t involved in something musical or church-related as a child or young teen, she was probably on a horse.  Arline and her first husband, James Paul Chandler, even dated on horseback.

Arline married James Paul Chandler on August 17, 1956, and they headed for Arkansas Tech, where she planned to study home economics while James Paul pursued veterinary medicine.  By the end of their second semester, the couple was back in Heber Springs, anticipating the birth of their first child… Debbie.  Eleven months later, they would welcome Suzanne…and three years afterward, Timothy Paul joined the family.  James Paul and Arline built a home at 210 South 9th Street in 1959, and this has been Arline’s primary residence ever since.


Arline spent the next several years teaching piano, organ and voice students in her home before and after school, while rearing the three children.  Countless music students went on to pursue professions as musicians or music educators – and many attribute this inclination to their early encouragement from “Mrs. Chandler.” Arline attended summer school sessions at what was then known as Arkansas State Teachers College – now UCA.

In 1964, Arline and her friend, Georgia Ann Beasley, opened Wee Wisdom Kindergarten in the basement of the Chandler home on Ninth Street.  For nearly a decade, the five-year-olds of Heber Springs and the surrounding area were given their educational “start” under the tutelage of “Miss Arline.”

When then-governor of Arkansas, Dale Bumpers, signed public school kindergarten into law in the early 70’s, Arline returned to UCA as a fulltime student and acquired her Bachelor of Science in Early Childhood Education.  She then became a kindergarten teacher at the Heber Springs Elementary School.  Arline taught public school kindergarten until 1984.  Many former students have commented in recent days that Arline gave them a firm foundation for learning…and several even went on to become teachers themselves.

Arline left teaching to pursue a fulltime writing career. She and James Paul had plans to travel across America in their RV, while she wrote children’s books, travel articles, and features on interesting “faces and places.”  And they did travel extensively throughout the United States and into Canada.
In 1987, Arline wrote the first feature article for Workamper News.  She became a staff writer for the publication, and subsequently authored three books on RVing and Workamping…Road Work, Road Work II, and she co-authored Workamper News’ Guide to Recruiting and Retaining the Right Workampers with her son-in-law, Greg Robus. Arline became a respected expert on RV travel and Workamping options, as well as “How to Write Your Life Experiences,” which became the name of one of several classes she taught to would-be writers.  She also taught classes in Workamping and creative writing for ten consecutive summers in Moscow, Idaho, at the Life on Wheels conference held annually on the University of Idaho campus.

Arline’s favorite place to visit was Branson, Missouri.  She and James Paul purchased an RV resort membership there, and they frequently made the 3½ hour trek north to spend anywhere from a few days to a week or more enjoying the sights and sounds of Branson and its surrounding area.  Arline wrote numerous articles about the entertainment and attractions of Branson, and she interviewed everyone from Dolly Parton, Tony Orlando, Kenny Rogers, Yakov Smirnoff, Todd Oliver and his talking dog Irving, to Lee Greenwood, Brenda Lee, and the Mandrell sisters, Andy Williams and Shoji Tabuchi, who became a good friend.  The Haygoods – a musical family who performed at Silver Dollar City and in the Branson area - were practically part of the family.

Arline became one of the best ambassadors ever to the Branson Convention and Visitors Bureau and the staff at Silver Dollar City, who all treated her like one of their own.  In 2010, Arline wrote The Heart of Branson…The Entertaining Families of America's Live Music Show Capital.”  Friends who knew Arline well dubbed her “The Belle of Branson,” and indeed, she truly was one of its biggest fans.

Arline was a charter member of the Athena Club in Heber Springs.  She was a member of the Ozarks Writers League.  For many years, she was a member of the choir at the First Baptist Church, and the Strings and Things Dulcimer group.  She served from time to time as pianist and organist at First Baptist Church – and other area churches when someone was needed to fill in for a short period of time. Arline was always willing to serve wherever and whenever she was needed in her church.  Even this past summer, she taught the preschoolers in Vacation Bible School.

Arline’s first husband, James Paul Chandler, died on October 9, 1999.  She continued traveling and writing for the next two years – both on solo adventures and with two dear friends, Jo-Ann Carmack and Johnie Stark.  On February 9, 2002, Arline married Lee Smith. They “hit the road” in Arline’s motorhome for a six-week honeymoon trip to the East Coast and New York…and they pretty well never looked back.  Arline and Lee Workamped and traveled from Maine to Alaska to Mexico – and dozens of destinations in between.  They enjoyed several winters in Arizona, and they spent the summer of 2014 in West Yellowstone, Montana.  Arline’s childhood dream was to see as much of this country as she could – and to absorb its history and beauty…and she did a very good job of accomplishing her goal.  She went horseback riding in South Dakota and river rafting on the Snake River in Idaho.  She took bicycle rides along the carriage road system of Acadia National Park in Maine, and she endured a miserable-for-her flight to Barrow, Alaska, the 11th northernmost city in the world – located above the Arctic Circle.

Besides her first husband and her parents, Arline was preceded in death by her son, Tim, and her in-laws, Truman and Polly Chandler.  In addition to her husband, Lee, she is survived by her daughter and son-in-law, Debbie and Greg Robus of Heber Springs;  daughter and son-in-law Suzanne and Mike Linn, of Heber Springs; grand-daughter and her husband, Jasmine and Jamison Gary, of Heber Springs and their three children – Timothy, Zola and Nathan Gary of Heber Springs; step-daughter Glynne Marie Smith-Greene of Baltimore, Maryland, and her children Reuben, Kathryn, Denise and Eli; step-daughter Janet Daily and her husband Craig, of Lebanon, Tennessee, and their daughters Kelsey and Sara; step-daughter Suzanne Wilson and her fiancé Ben Moyer of Olive Branch, Mississippi, and her sons John, Brandon, and Tristan; step-son Eric Smith of Hernando, Mississippi, and his sons, Gowyn and Hagyn;  four step-great-grandchildren; one sister, Diane Williams, of Fayetteville, Arkansas; two nephews, Brent Warren of Farmington, Arkansas, and Byron Warren of Gravette, Arkansas;  and many other dear relatives and friends.

Email ThisBlogThis!Share to TwitterShare to FacebookShare to Pinterest
Meet Arline...


Arline Chandler left a teaching career in the kindergarten classroom to launch full-time into writing. She has found that RV travel fits hands-on-keyboard with discovering people and places for her many articles in Workamper News, Branson's Review, Coast to Coast Magazine, Motorhome, Ozarks Magazine, and other entertainment, travel, and senior adult publications.

Arline's book, Truly Zula, Daughter of the Ozarks, traces the life of her 90-year-old aunt, Zula Turney, combining Mrs. Turney's memoirs with glimpses into the history and culture of the Arkansas Ozarks.

Arline is also in demand as a speaker. Between 1995 and 2005, she served on the staff of Life On Wheels RV Conference at the University of Idaho, and spoke at The Rally and Job Fairs across the United States. She is currently available to speak at RV rallies or travel related events about the merits of combining work with travel. Her book, Road Work: The Ultimate RVing Adventure, published in 1997 and revised in 2003, covers this subject. Also in 2003, she co-authored with Greg Robus, Workamper News' Guide to Recruiting and Retaining the Right Workampers. Her book Road Work II: The RVers' Ultimate Income Resource Guide, is an extension of Road Work: The Ultimate RVing Adventure (SOLD OUT), focusing on the expanding possibilities in jobs and volunteerism for Workampers.

Arline is also available to speak at conferences and community events on aspects of writing gleaned from writing courses, seminars, and her own experience in the field of writing. Additionally, she presents two classes on caring for elderly loved ones, aimed at the "Sandwich Generation," individuals often caught between the responsibilities of raising children and caring for aging parents. Her book, When Heads and Hearts Collide, shares her personal experience in caring for her aging parents.

When not on the road, Arline makes her home in Heber Springs, Arkansas.